Food and drink employment on an upward trend

Food and drink employment on an upward trend

Figures released today by the ONS show there were 19,000 more jobs in the food and drink industry in Q4 2021 compared to a year ago. Although there were 5,000 fewer jobs than in Q3, the employment trend in the industry is on an upward trajectory, as the 4-quarter average, which removes seasonal variations, indicates.

Like many parts of the economy, food manufacturers are still experiencing significant and stubborn labour shortages, from warehouse workers and engineers to HGV drivers, butchers and vets. February data for the wider economy shows UK vacancies have reached a new fresh record of 1.3m, with vacancies in most sectors increasing.

The central role played by the industry in everyone’s lives is becoming more visible. The 468,000 jobs in our sector are scattered right across the UK, showing the vital part food and drink companies can play in the UK Government’s ambition to level up the nation.

The significant rise in production costs will make for significant headwinds, but our food manufacturers are committed to raising productivity and wages, by adopting new technologies and increasing automation. The FDF’s Innovation Gateway can help your business access the expertise and funding available to improve manufacturing processes through technology.

The labour market continued to recover in January, as the number of payrolled employees has also reached a new record high. However, the inactivity rate rose as well, driven by older workers taking early retirement and some reporting long-term illnesses. The increase in economic inactivity in older workers during the pandemic period has bucked a historical trend where the inactivity of older workers has been declining for the past 10 years.

Jobs in the food and drink industry 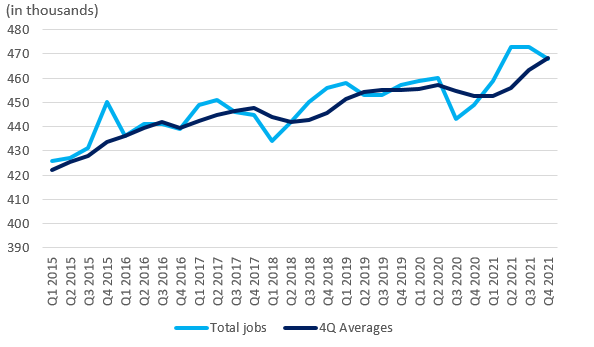 But the prospects for the labour market are likely to deteriorate in the medium term. The disruptions to energy and commodity supply brought about by the war in Ukraine will push up inflation for longer. Furthermore, the current extraordinary market uncertainty will also put the brakes on growth.

This means households will certainly cut their discretionary spending, not only because they are feeling the inflationary squeeze, but also in an attempt to increase their safety net during uncertain times. The GFK consumer confidence plummeted in February to one of its lowest levels since the start of the pandemic, with the forward-looking indicators on personal finances and the wider economic situation showing the biggest falls. In addition, pay growth is not keeping up pace with the inflation rate, with negative growth in real regular pay of 1.0% in January.

As the UK economy braces for stagflation – a combination of lower growth and high inflation – businesses are likely to slow down investment and hiring until they get more clarity about the economic outlook.