Food and drink employment on the rise

Food and drink employment on the rise

Data released today show that employment in the food and drink industry continued to rise in Q1 2022, with the industry gaining 7,000 jobs since the previous quarter and 16,000 on the year, reaching 475,000.

The industry added jobs at a faster pace than the economy as a whole: quarter-on-quarter, job growth stood at 1.5%, above the UK’s growth of 0.8%. Year-on-year, the industry saw a rise of 3.5% in the number of jobs, a more rapid acceleration than UK’s one of 2.7%. 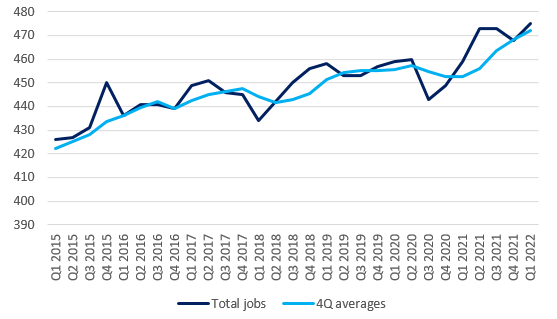 While the above figures speak of growth and recovery of the industry, the reality is a bit more nuanced, as the current environment remains very challenging. Labour shortages persist and are severe. Our members reported that they had 5.2 unfilled vacancies/ 100 employees in Q1 2022, above the average in the UK as a whole of 4.1 vacancies/ 100 employees. The war in Ukraine has unleashed a new wave of production cost rises, from higher prices of food ingredients and packaging to energy, with further effects to ripple through to the autumn when lower yields are expected as a result of lower fertiliser use, give that its prices have skyrocketed. The sheer rise in production costs means that manufacturers will have to absorb some of these. As profit margins in the industry are already thin, current conditions threaten to stop growth in its tracks, with innovation and new investment projects possibly being put on hold to free up much needed extra resources.

In the wider economy, familiar trends of the last year persisted. Over the three months to April, employment rose, though it remained below pre-pandemic levels, while unemployment and economic inactivity decreased. Vacancies rose to a new record of 1.3m, albeit at a slower pace. However, the economy slowed in April, for a second consecutive month, as production cost-inflation impacted output and the war in Ukraine increased uncertainty, pausing investment decisions. There is, usually, a lag between output slowdown and a pickup in unemployment. Geopolitical developments over the next few months will be the main determinant of growth in the medium term.

UK average pay, excluding bonuses, increased by 4.2% in the three months to April. That compares to a rise of 4.1% in the food and drink manufacturing. While in real terms that means that people were 2.2% poorer on average, the 4.2% rise is large enough to worry the Bank of England about expectations of high inflation having become ingrained. Moreover, if bonuses are considered, then pay rose by 6.8%, which keeps real incomes in positive territory. The Bank of England is worried that a tight labour market will perpetuate inflation, which, at 9.0% in April, is at uncomfortable high levels. Today’s data might put pressure on the Bank to consider several further rate rises, at a time when growth is clearly decelerating.